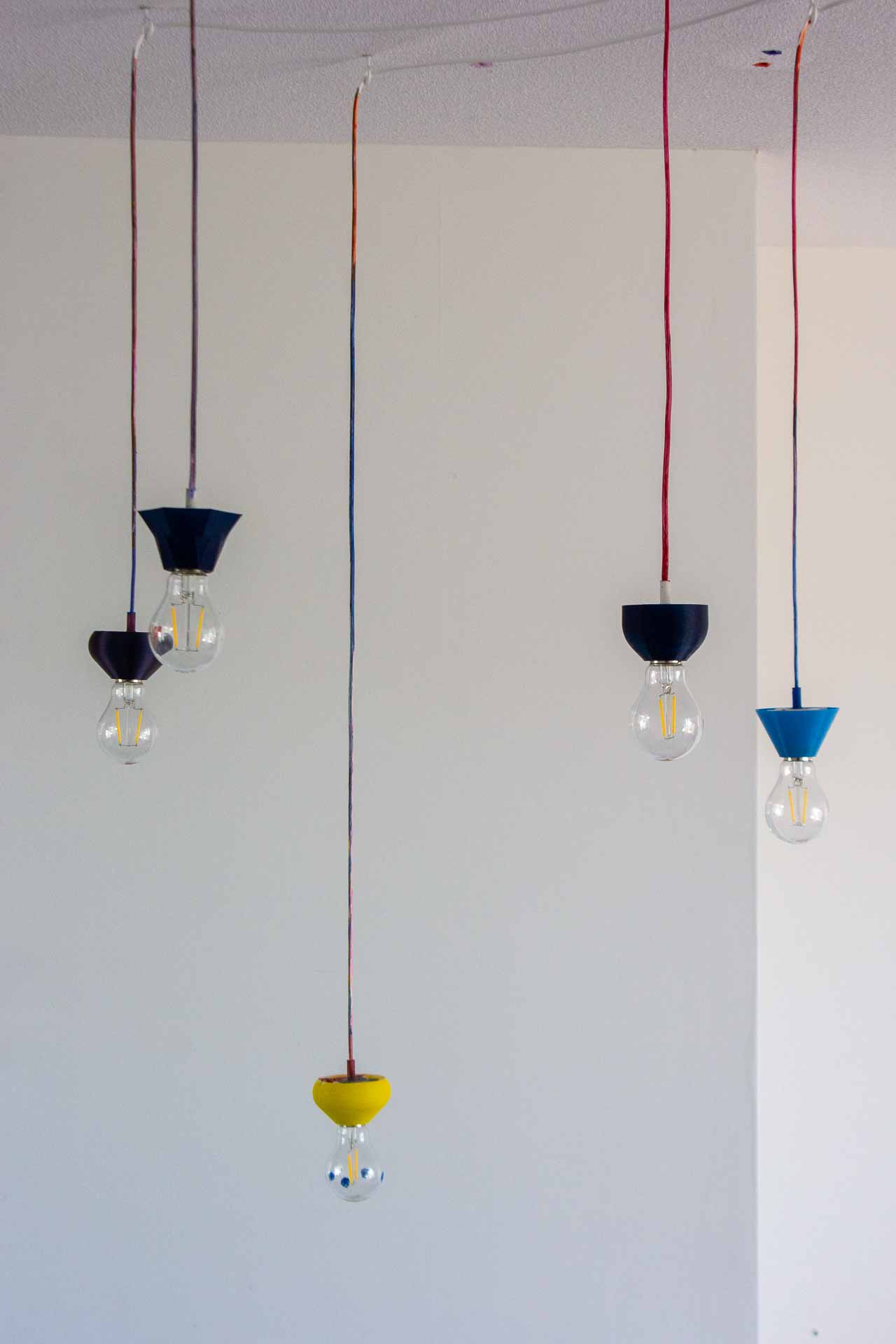 You probably know our Simple Sockets by now, otherwise check this link first to understand what they are. Basically a simple and modular lighting system.

He got into painting and colour in general some time ago. Now he was looking to bring some more colour into the lights as well. Literally?!?

We got together, we checked the situation, had a beer.

some cool and crazy lights hanging above the dining table

Simple. Simple Sockets. An installation of 5 Simple Sockets Paint with Bomb covers, so he can paint them all himself. They will be hanging, at various heights but forming a tree shape on the ceiling. using 5 Simple Pendant lids and wire. 5 wall hook screws and wall mounts + 2 electric connectors like these.

(We sell the Pendant lid in a full Simple Pendant package, which includes other components, but reach out to us if you would like to make a similar installation.) 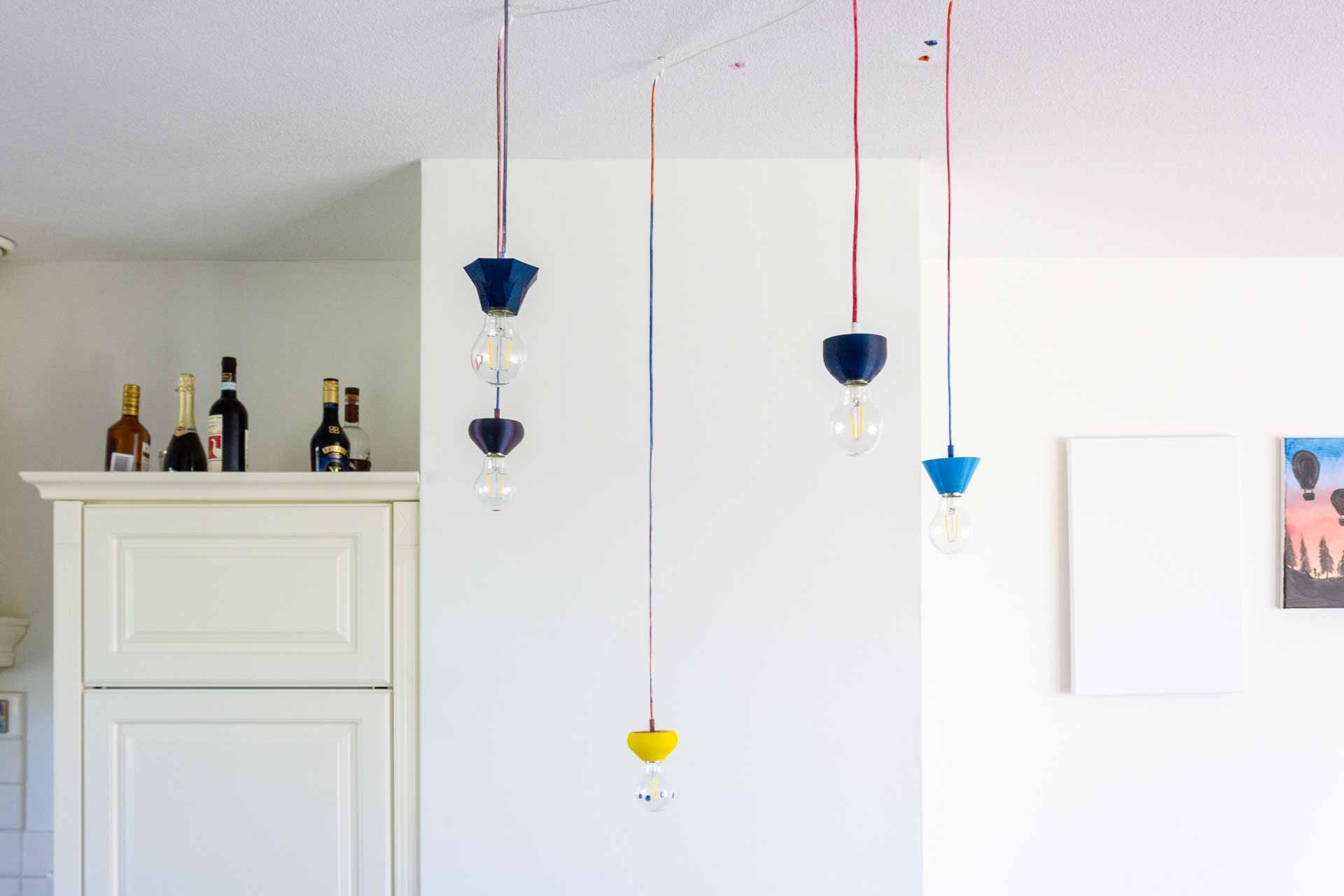 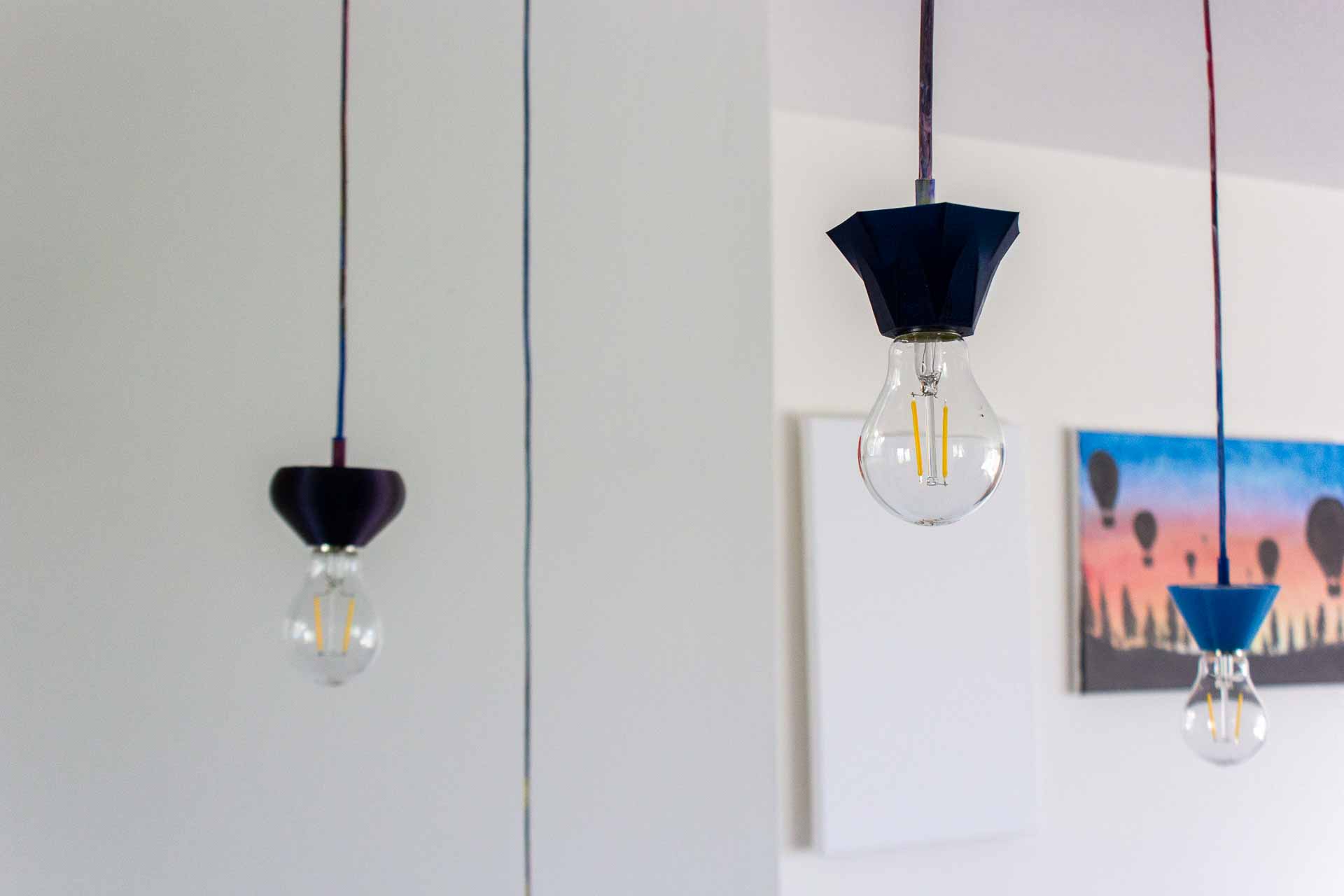 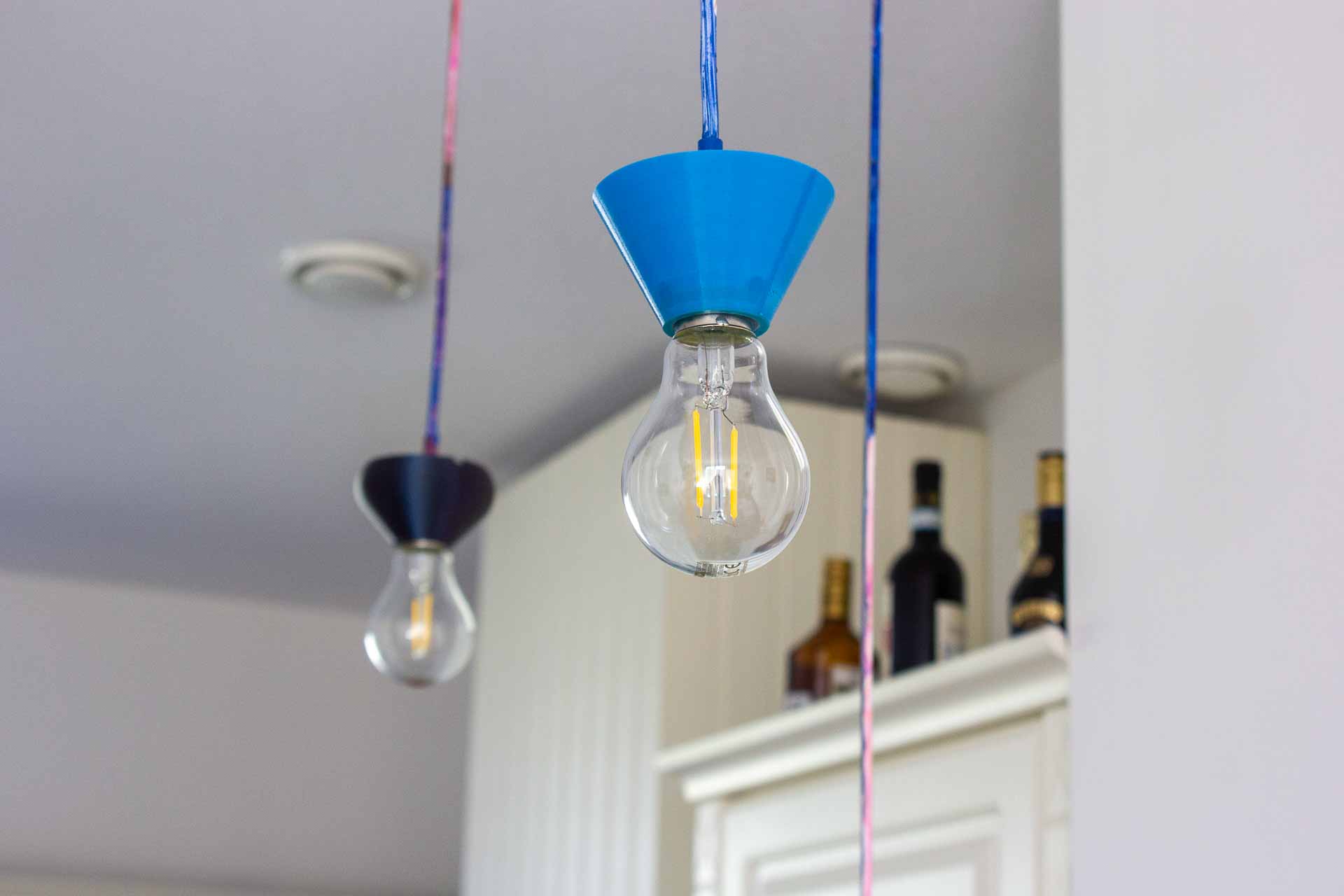 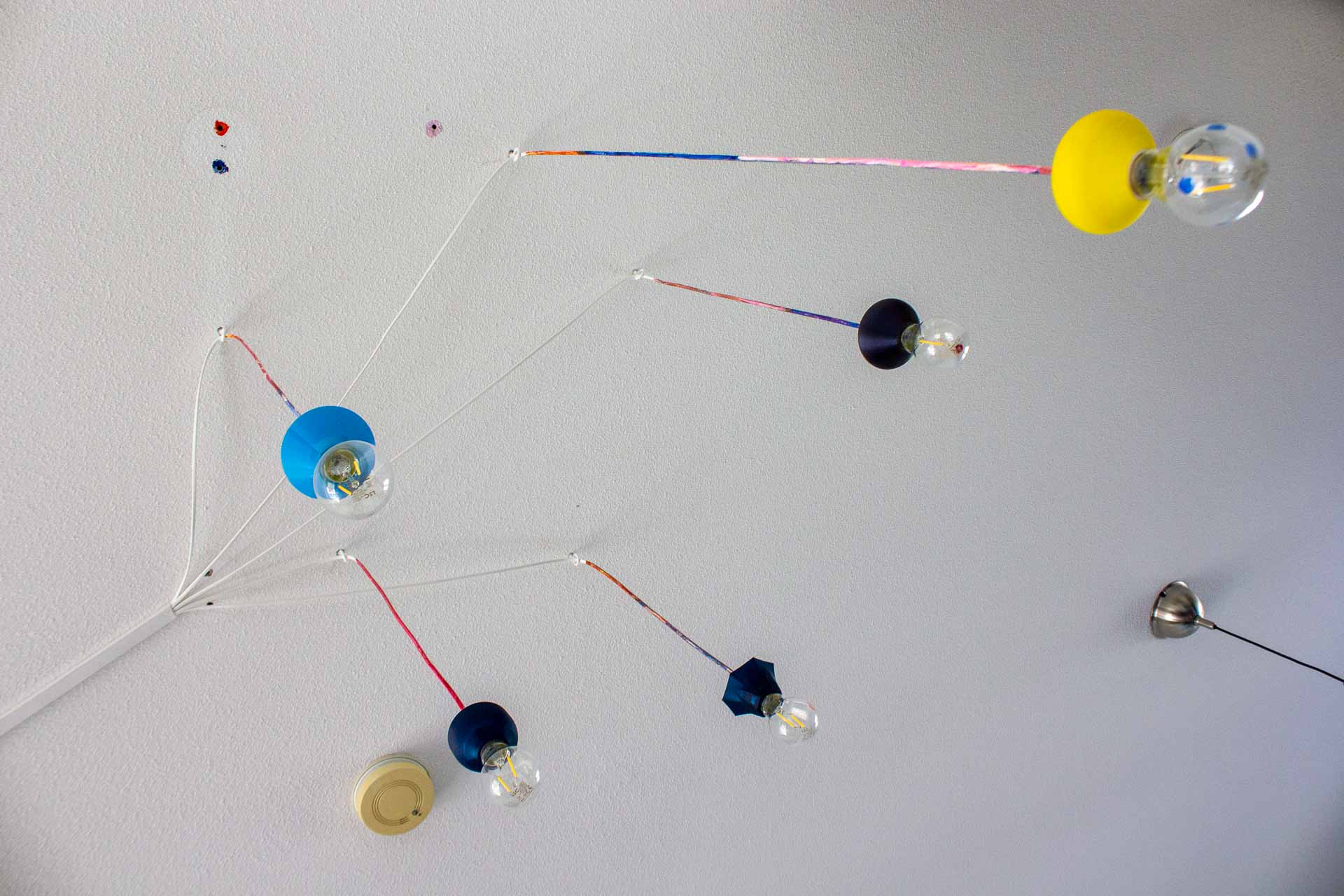 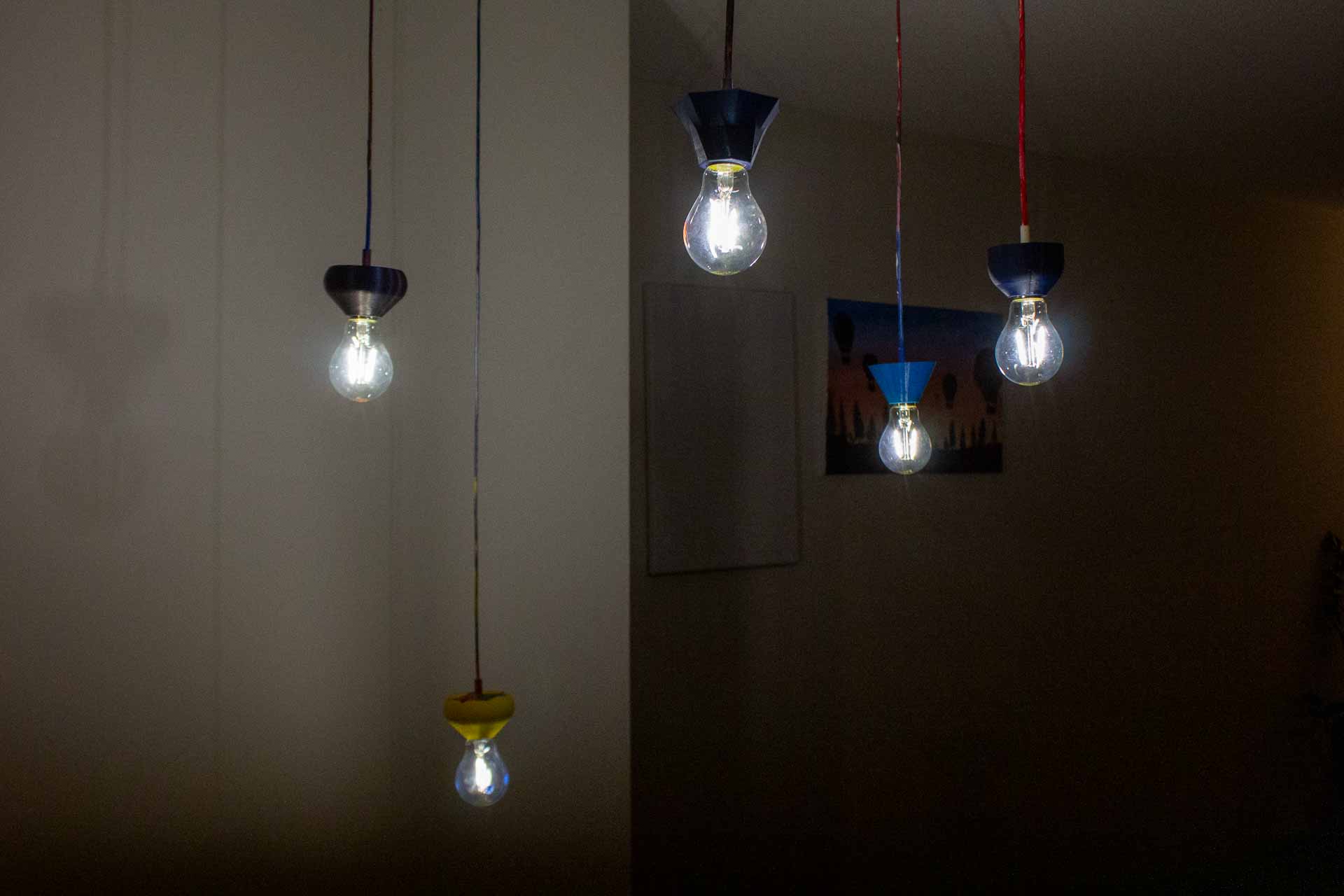 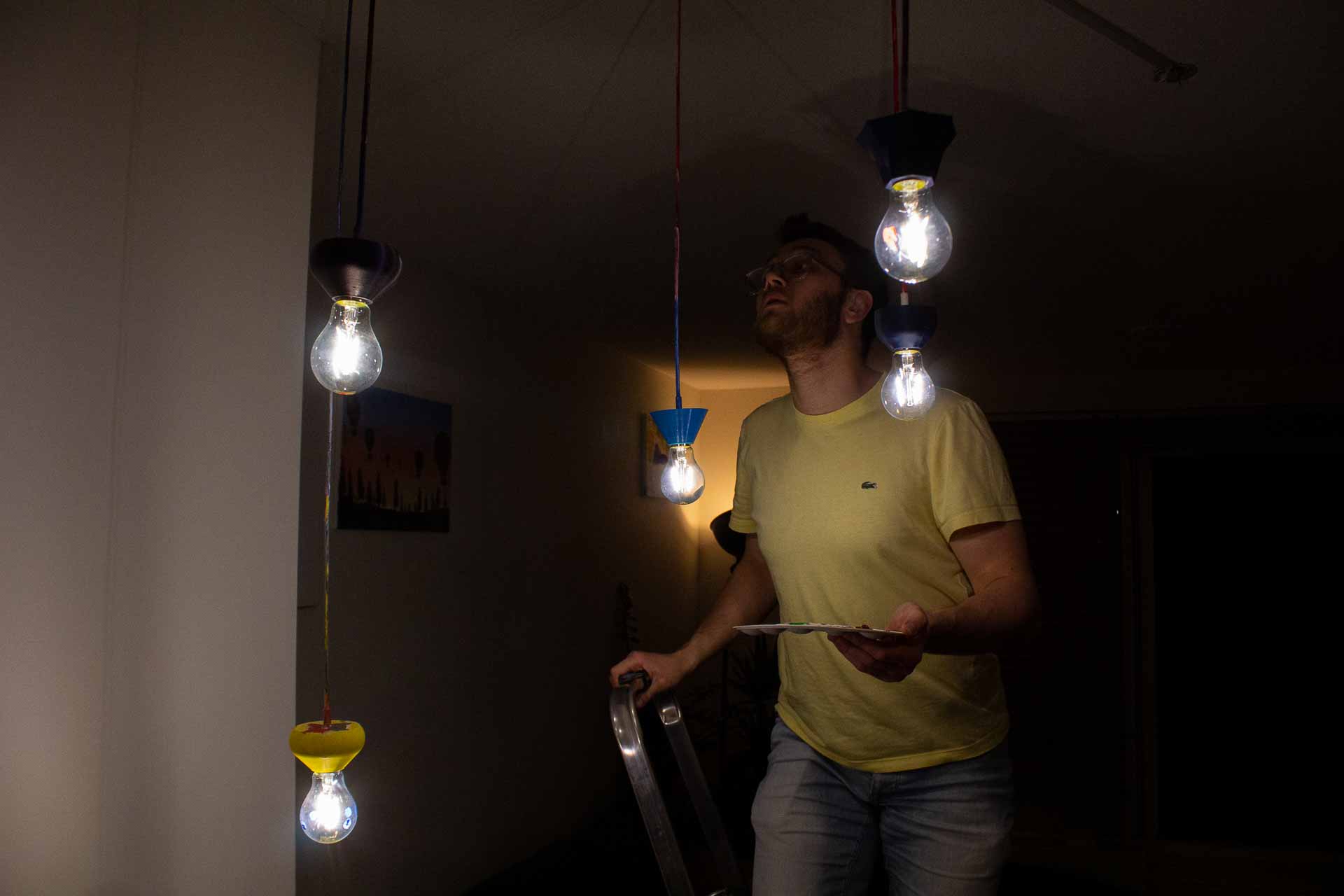 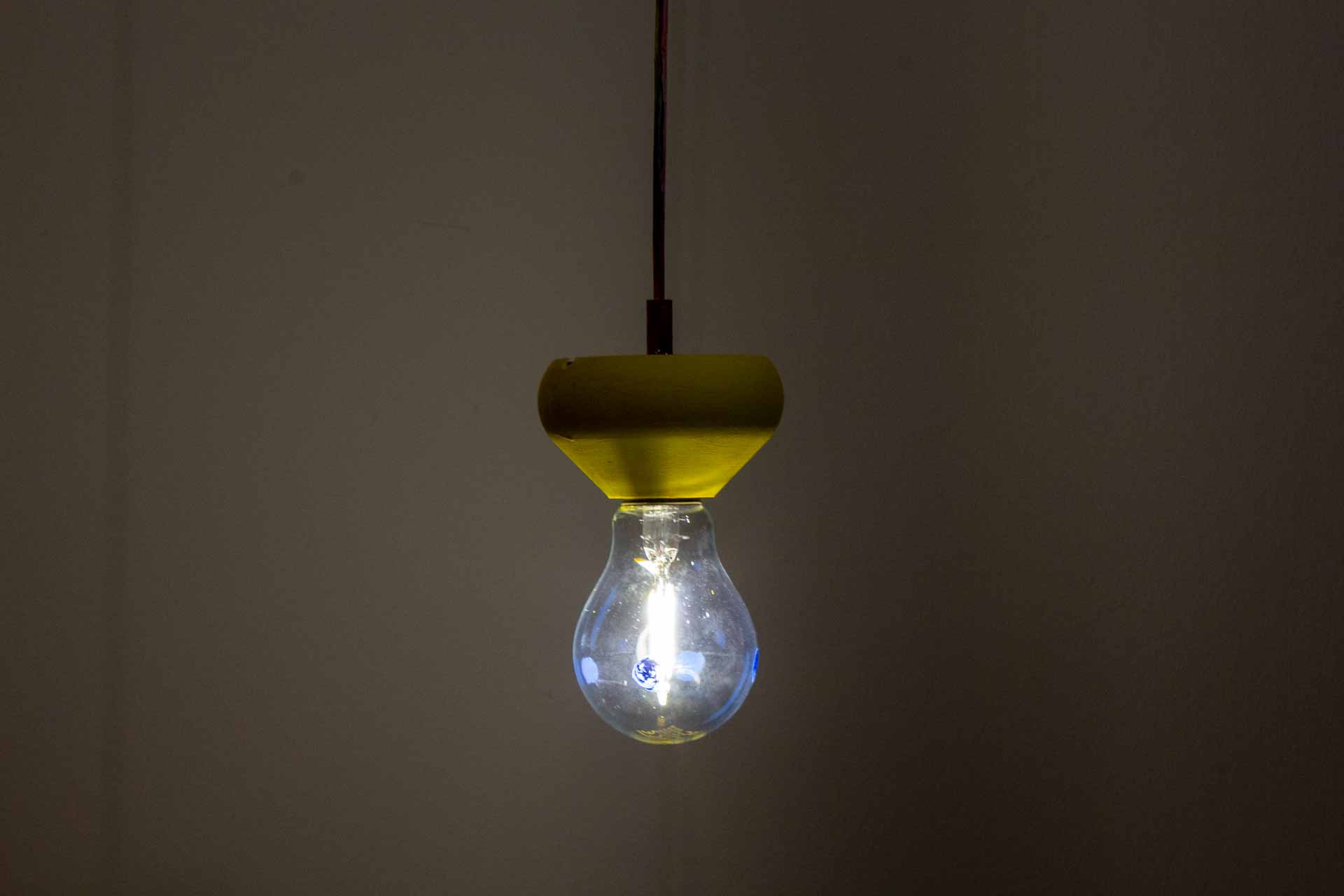 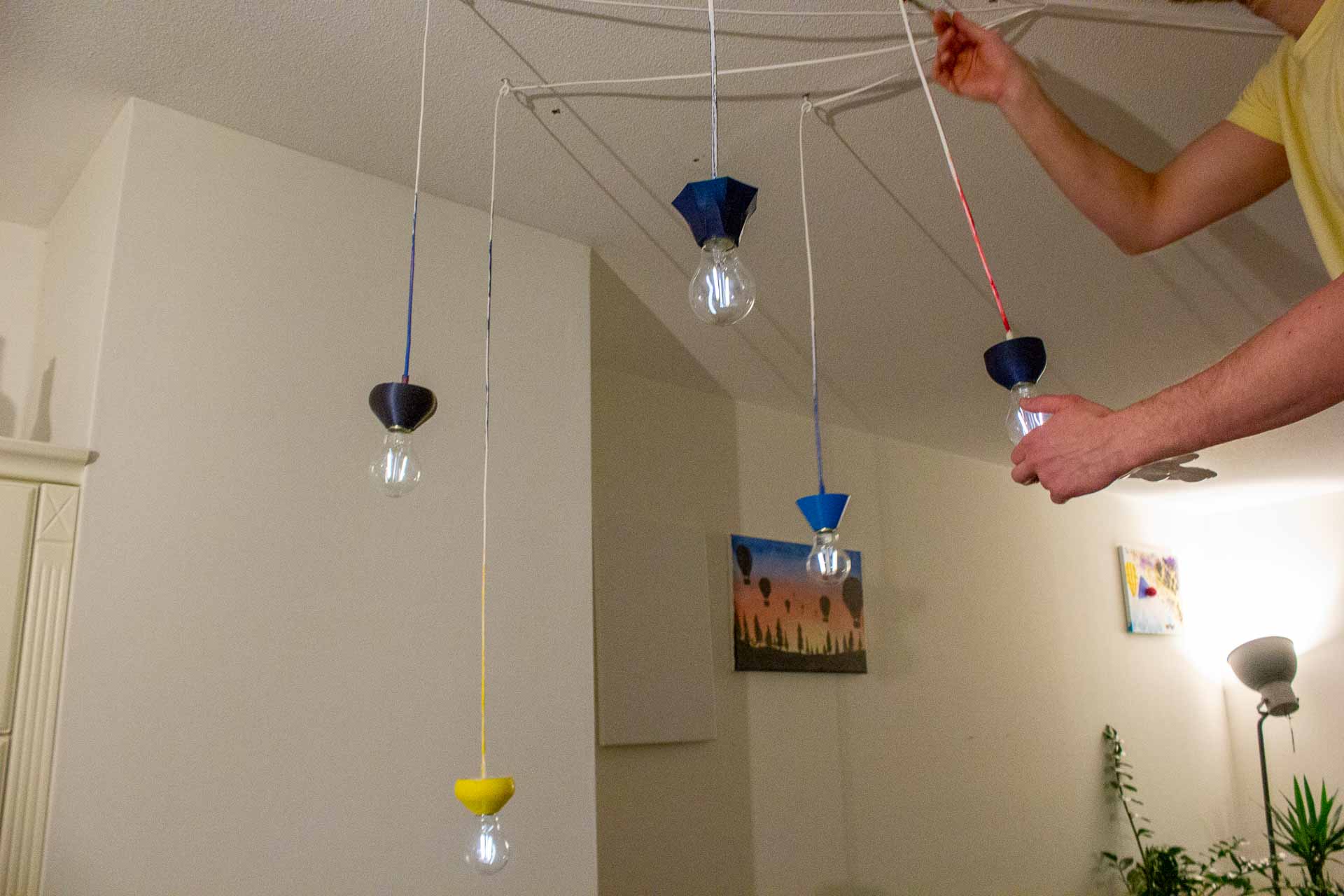 This is job done on home A/C electricity which can be bad. But if the power is off and you measure it, no problem.

Drink some water. Luckily, no lights were connected to the electricity wires in the centre of the ceiling, so nothing had to be removed.

Measured the lengths for each wires, depending on how low they were hanging but also where the mounting holes would be, so it becomes a tree on the ceiling.

We drilled in the ceiling 5 holes, for each hook holding a Simple Socket. Consequently placed the hooks as well. And cleaned after.

Since we had 5 Simple Sockets, so 5 light bulbs, we had to split the power from the electrical wires. We used for both A/C wires some splitter connectors with 8 holes. There are many solutions, just make sure they are secured well.

Ran the cables through the hooks and check the final height again.

This was quite fast, but Peter wanted different covers now. Instead of all 5 being the white Bomb cover, 4 would have different cover shapes (Bomb, Cone, SuperMocca and Bottle) in 4 different shades of blue. 1 other would still be the Draw, so he can still paint it. Usually it would suck to change a project at the end, but Simple Sockets are modular, so we could just swap the cover.

Then Peter put his touch onto the Draw … and even the cables.

Check some of the photos of the installation below.

Later edit: it was upgraded again!

This time all the bulbs were replaced with smart bulbs from LSC, to be able to control them with Google Home. Some cool pictures with the possibilities below. 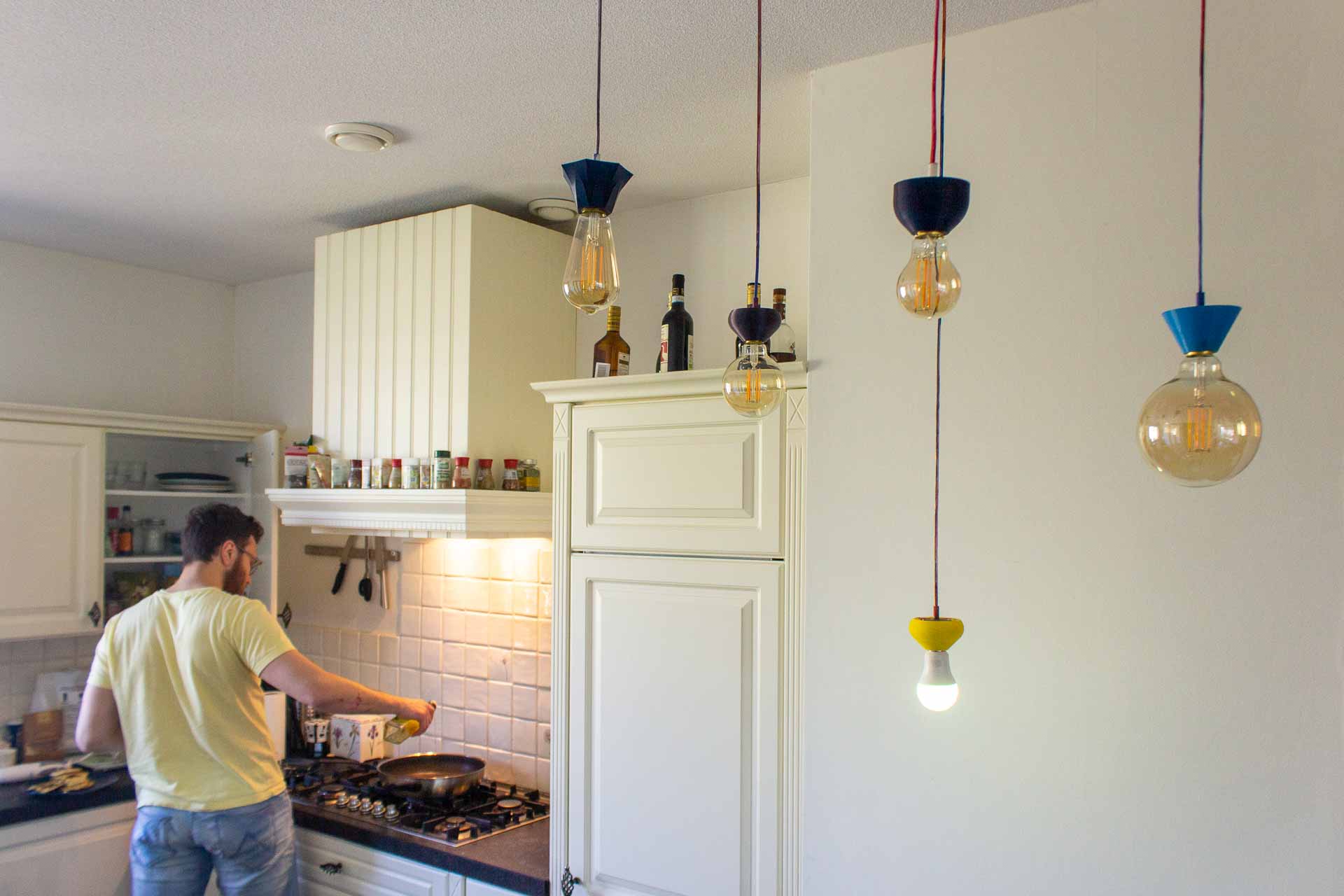 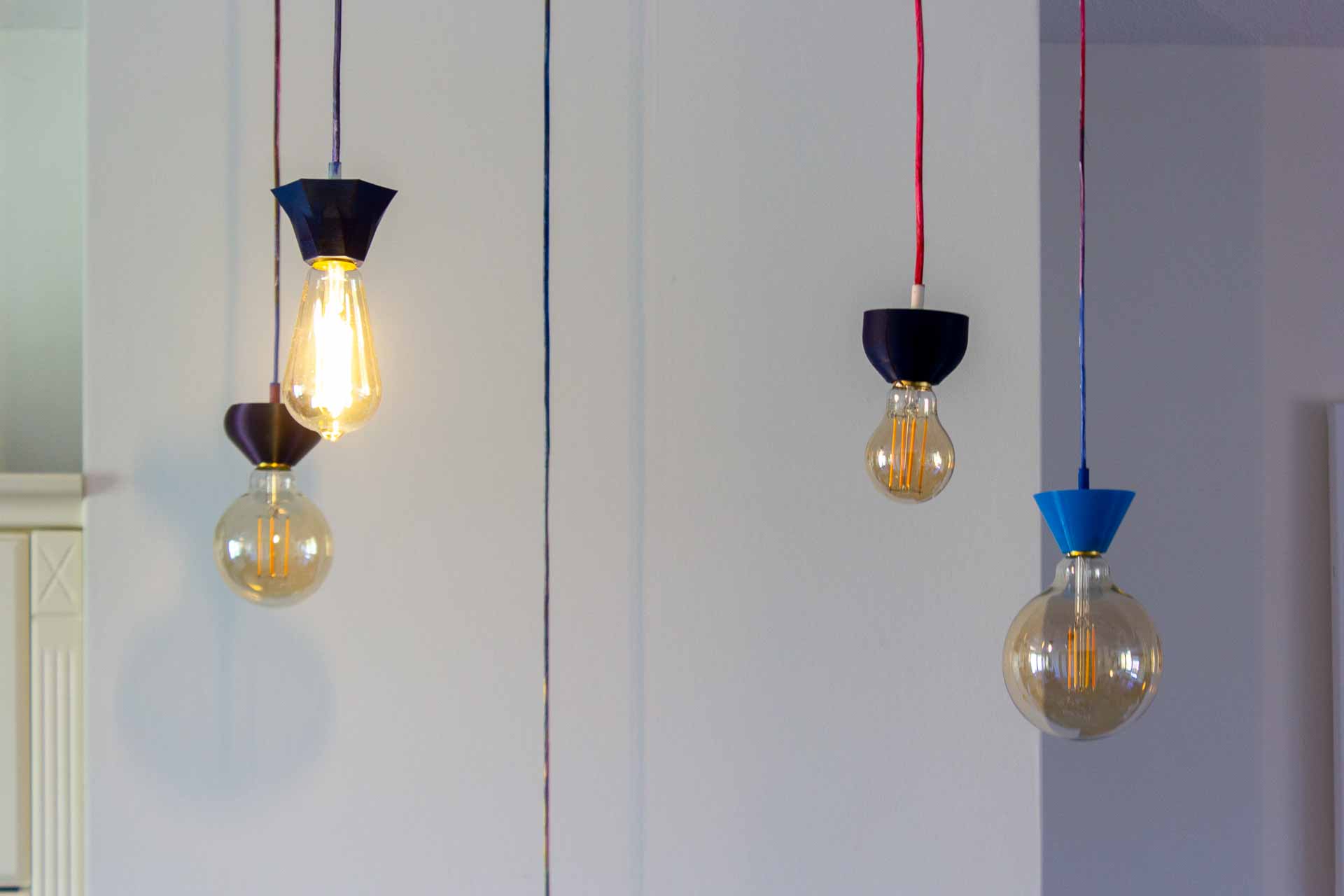 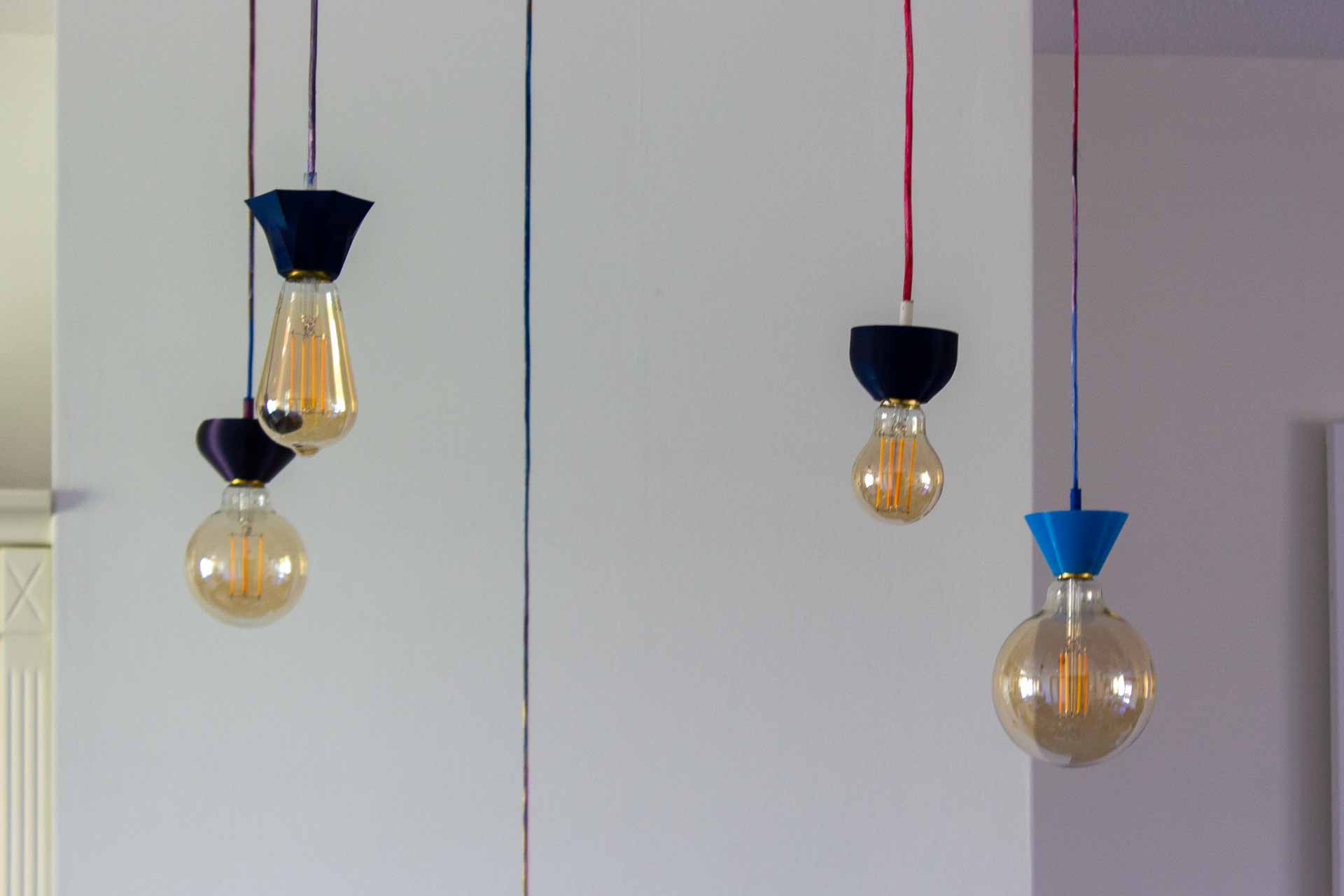 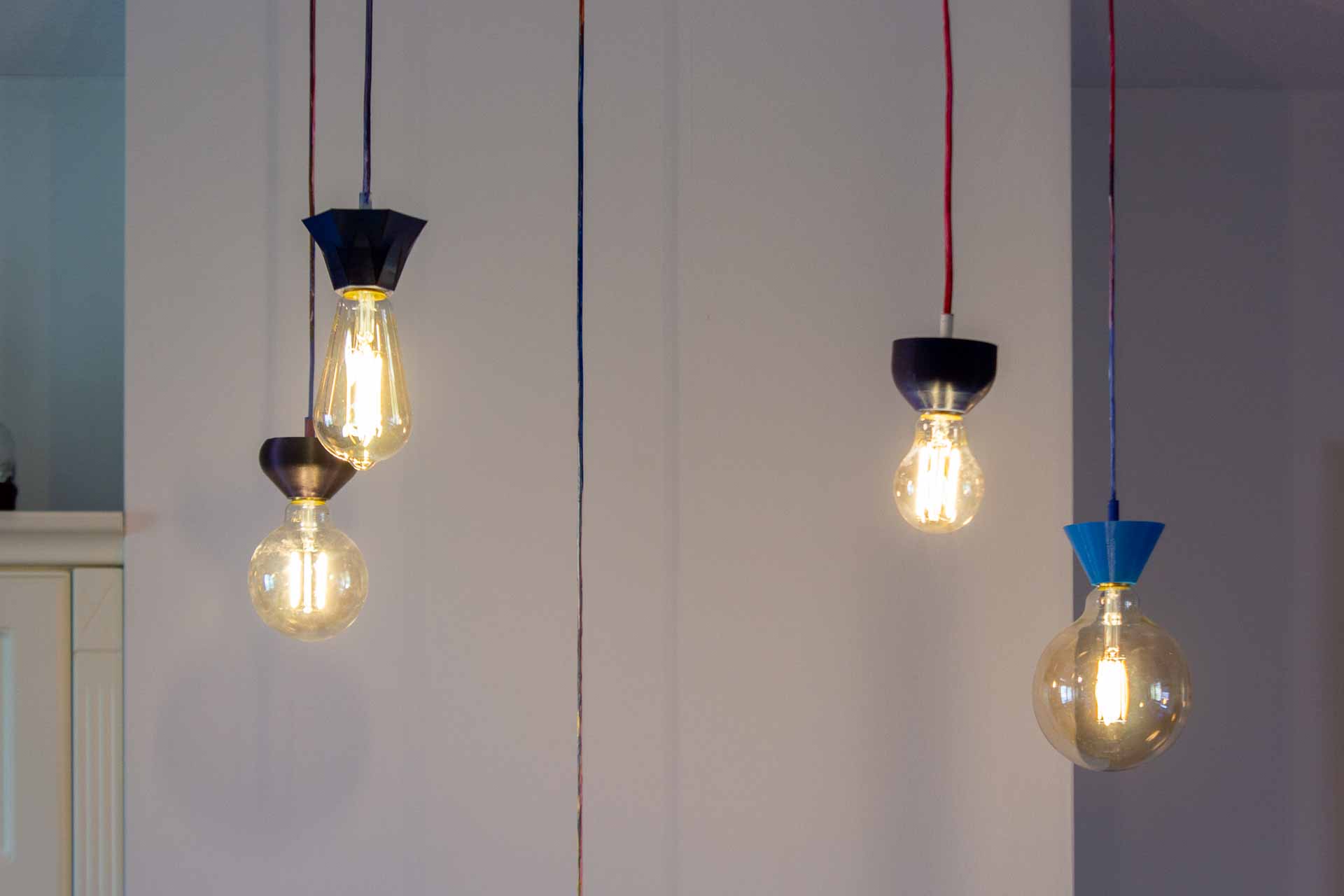 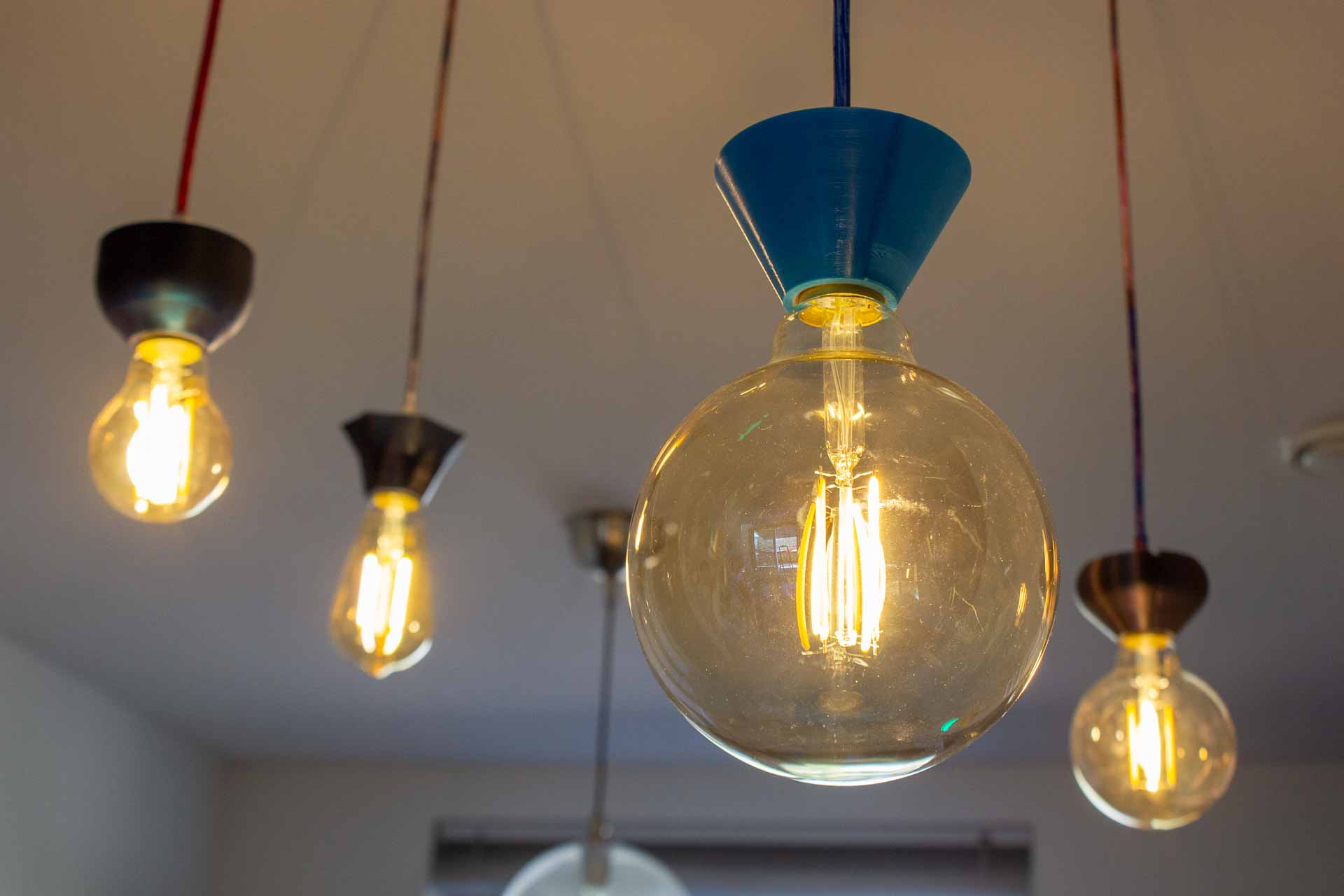 "Hola and hope you enjoyed it. Hope you'll try on these things as well and that you're feeling inspired. I will continue to write about what we're making." 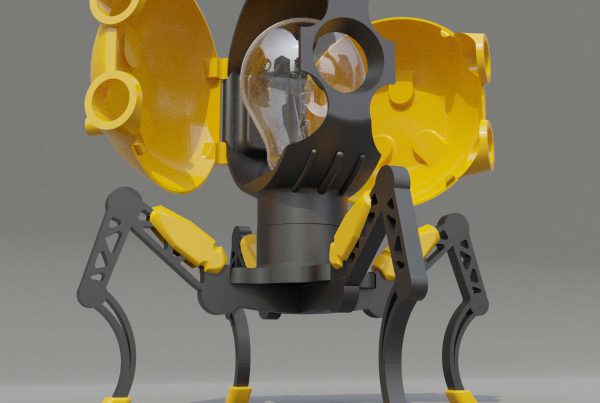 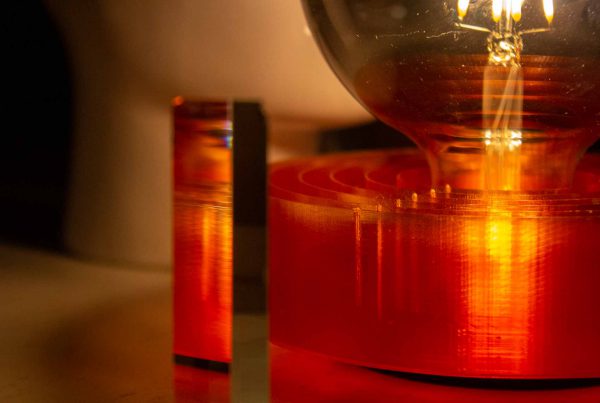 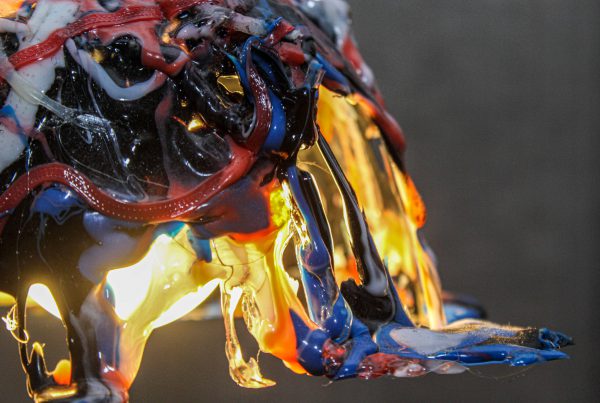